Published on September 27, 2017
MVLRI® has launched a series of quantitative research reports exploring characteristics of students in state virtual school courses, specifically focused on those who took courses for credit recovery (CR). The final report of this series was to extend the work exploring learning profiles to other subject areas most frequently taken by credit recovery (CR) students: Algebra 1, English Language & Literature 9, and U.S. History & Geography 1. We discussed clustering results as a way of providing data-driven benchmarks for the optimal course behavior patterns, which may be used by instructors and course mentors for guidance in monitoring students’ progress. 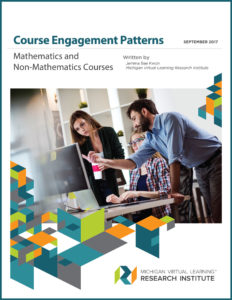 MVLRI® has launched a series of quantitative research reports exploring characteristics of students in state virtual school courses, specifically focused on those who took courses for credit recovery (CR). Using Michigan Virtual School® (now known as Michigan Virtual™) data, the second and third reports in the series illustrated data-driven learning profiles focused on motivation to complete course assignments and academic time investments in courses. Algebra 2 courses were targeted and time series clustering methods were used for the two variables: weekly attempted scores and weekly totals of minutes recorded in the learning management system (LMS). The final report of this series was to extend the work exploring learning profiles to other subject areas most frequently taken by credit recovery (CR) students: Algebra 1, English Language & Literature 9, and U.S. History & Geography 1. We discussed clustering results as a way of providing data-driven benchmarks for the optimal course behavior patterns, which may be used by instructors and course mentors for guidance in monitoring students’ progress.

WHAT WE ALREADY KNOW ABOUT THIS TOPIC:

A survey study has demonstrated that students tended to show more negative perception for mathematics courses than for English and social studies courses. They perceived the online learning experience with mathematics courses as being less successful, rich, and recommendable for other students.

It is important to ensure for students an effective means of asking questions; available in-time support; teachers’ demonstration, modeling, and additional explanation; a means of supplementing a lack of experience with online mathematics tools and prerequisite skills; and opportunities for collaboration. The authors also highlighted that students putting forth a sufficient effort on studying was critical.

WHAT THIS REPORT ADDS:

This study has tried to fill the gap in research by focusing on students’ behaviors in courses. Data on attempts to complete the course assignment generated the largest group with the profile of “consistent and persistent coursework throughout the semester” for both mathematics and non-mathematics subject areas.

When it comes to academic time, the representative cluster did not result from the profile of significant time investments as a result of consistent coursework or multiple attempts to increase in academic time. Rather, the largest group featured a sharp surge of the time investment at a particular time segment, for instance, the final week.

Observing these results with course completion status (i.e., passing or failing members) carried implications that the characteristics of a greater amount of academic time and/or multiple peaks in time investments could be related to the successful learner group in non-mathematics courses, but not necessarily in mathematics courses.

Data-driven benchmarks carry strong implications for instructional practitioners, e.g., teachers and academic mentors. As student autonomy is important in terms of pacing, the pacing guide suggests some benchmarks (timeframe for tasks, how many, and which ones, etc. a student should finish to be successful) or practitioners’ personal standards for monitoring student pacing and progress.

However, the pacing guide is more of an ideal expectation, and practitioners’ personal standards are not necessarily consistent and may not reflect “evidence-based practices.” However, data-driven benchmarks are more real and “evidence-based,” providing information from analyzing real data. Therefore, the following data-driven benchmarks for the optimal course behavior pattern may be helpful for practitioners to monitor students’ progress over time.